Techies around the world are talking about Node JS features and it’s benefits while Node is taking over all other tech stack. All frameworks have their own benefits, so the question arises that why Node JS has become standard for enterprise development?

From years JavaScript has been providing many libraries to accomplish interactive applications but it had never compete with already well established backend languages until now. Node JS has come with cool features in JavaScript family to offer viable substitute to backend languages.

According to Node JS user survey, 43% of Node JS programmers use it for developing enterprise apps.

Node JS is light, scalable and cross-platform way to build a code and execute it. The number of downloads has reached to billions and increasing. It is fetching everyone’s attraction and also demand is getting higher in programming skills.

From early 2019, stats below says that Node JS has been used almost 50% from total of used frameworks, libraries and tools. Node JS is dominating over all other frameworks and with that job ratio for the same is also increasing in the same domain. 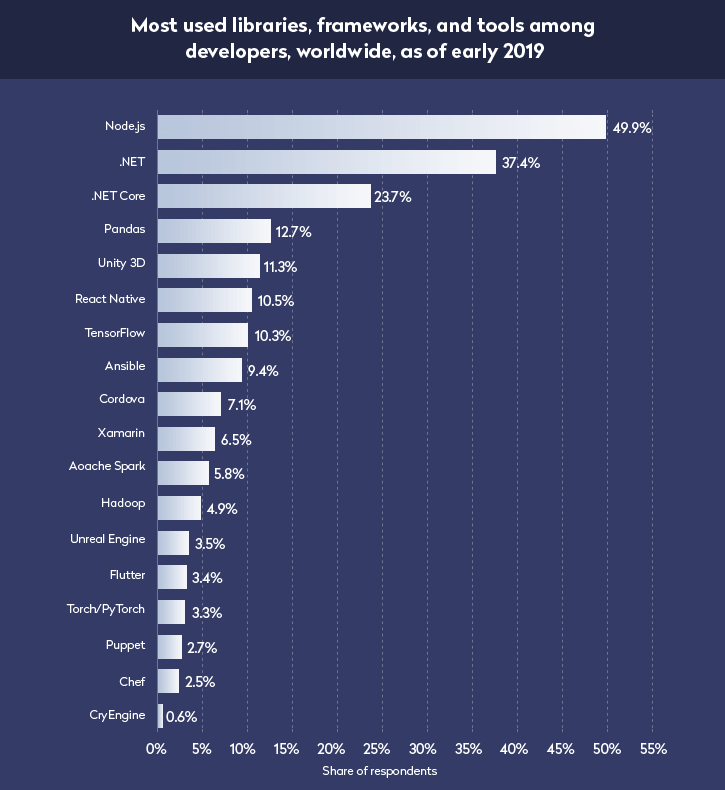 Fact is that many startups tend to use new technology and because of that newly came framework gets momentum but it is not the same with Node JS, as Node JS has already been implemented by many giant companies like NASA, Walmart, Intel, and Twitter.

Having built in Google Chrome’s V8 and written in C++, it can be operated from multiple operating system. Both V8 and Node are frequently updated with small version changes which includes security patches, performance optimization, and support all modern JavaScript frameworks. It uses the fastest data exchange format i.e. JSON data.

Node make use of event loops and callbacks for I/O operations which allows it to handle millions of simultaneous connections. This makes Node JS best in performance and lightening fast.

The Node package manager also known as npm, has huge number of pre-built packages which enables user to reuse code and make life easier by not putting another level of complexity in the code.

Our developers have experience in building highly configured admin panel, task management system, restaurant apps and etc. Visit Skywave Infotech to know more about our services and share your idea and get a free consultation.

How Much Upgrade And Mobile App Maintenance Costs?

How Much Upgrade And Mobile App Maintenance Costs?

It is a long established fact that a reader will be distracted by the readable content of a page when looking at its layout. The point of using Lorem Ipsum is that it has a more-or-less normal distribution of letters, as opposed to using 'Content here, content here', making it look like readable English. Many desktop publishing packages and web page editors now use Lorem Ipsum as their default model text.